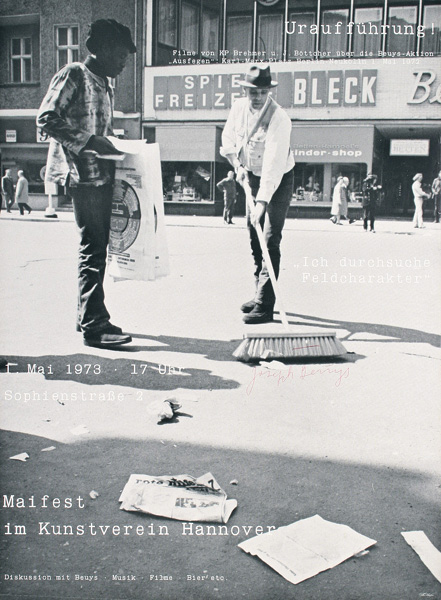 Joseph Beuys (12 May 1921 – 23 January 1986) was a German performance artist as well as a painter, sculptor, and graphic artist. His extensive work is grounded in concepts of humanism, social philosophy and anthroposophy; it culminates in his “extended definition of art” and the idea of social sculpture as a Gesamtkunstwerk, for which he claimed a creative, participatory role in shaping society and politics. His career was characterized by open public debates on a very wide range of subjects including political, environmental, social and long-term cultural trends. He is widely regarded as one of the most influential artists of the second half of the 20th century. Source: wikipedia.org.

Today in History: Mercedes-Benz founded in 1924

Gottlieb Daimler and Karl Benz merged their two companies 96 years ago on this day and created one of the greatest automobile companies in the world. It started with two different ideas for two different cars by two different men: both Daimler and Benz manufactured their own cars for some 30 years until the merger that was largely created out of economic sense. Benz & Co. was formed in 1883 and its first motor car rode through the streets of Mannheim in July 1886. Daimler who had been working on his own motor carriage founded the Daimler-Motoren-Gesellschaft in 1890 and marketed the first Mercedes in 1901. Both companies did well until shortly after World War I when the global economic climate of the early 1920s forced the two companies to form an alliance. In 1924, Daimler and Benz began marketing their products jointly while still working under separate trademarks. In June 1926, the two oldest motor manufacturers merged to form Daimler-Benz AG.

On this day in 1963, screen legend Audrey Hepburn (born Audrey Kathleen Ruston) passed away. The British film and fashion icon was one of Hollywood’s largest movie stars during the 1950s and 1960s. Hepburn shot to stardom through her Oscar-winning lead role in Roman Holiday in 1953. She went on to star in a number of successful films, such as Sabrina (1954), The Nun’s Story (1959), Breakfast at Tiffany’s (1961), Charade (1963), My Fair Lady (1964) and Wait Until Dark (1967). Hepburn devoted much of her later life to UNICEF. She died of appendiceal cancer at her home in Switzerland at the age of 63. Source: wikipedia.org

Today in History: Walter Schnackenberg born in 1880
On this day in 1860, Walter Schnackenberg was born in Bad Lauterburg, Germany. Schnackenberg found his vocation as a draughtsman and painter while still very young. At the age of 19, he went to Munich to attend the school of Heinrich Knirr. He studied under Franz von Stuck at the academy where his talent for drawings and caricatures became apparent. His illustrations were published in the magazines ‘Jugend’ and ‘Simplicissimus’. Schnackenberg took several trips to Paris, where he was particularly interested in the works of Henri de Toulouse-Lautrec. In 1908/09 he met Picasso. Walter Schnackenberg established his reputation in the field of printmaking – his frivolous posters for the Deutsches Theater in Munich became legendary. He was also well known for his designs of stage sets and costumes.

On this day in 1986, an explosion and fire at the No. 4 reactor of the Chernobyl nuclear power plant in Ukraine resulted in a nuclear meltdown sending radioactivity into the atmosphere. The radiation fallout spread throughout Europe. Within 48 hours, monitoring stations in Sweden, Finland and Norway began reporting sudden high discharges of radioactivity in the atmosphere. After two days, the Soviet Union, via the official news agency, Tass, admitted there has been an accident at the Chernobyl nuclear power plant in Ukraine. The Chernobyl disaster is considered the largest nuclear accident in history.

Today is ‘Save The Elephant’ Day

They might be wildlife icons, but, sadly, elephants are in crisis. Save The Elephant Day is a chance to show our love and support for these much-loved giants and raise awareness of the threats to their future in both Africa and Asia, ranging from ivory poachers and traffickers to loss of habitat. Also known as World Elephant Day, the occasion was founded by the Elephant Reintroduction Foundation, based in Thailand, working together with Canadian film-maker Patricia Sims. The launch of this international initiative in 2012 saw the release of the documentary film ‘Return to the Forest’, narrated by Star Trek legend William Shatner. The ideal way to mark the day is to donate to a charity helping elephants or organise an event in aid of these beautiful but threatened beasts. You could also watch a wildlife film about elephants or sign a petition to raise awareness. (source: http://www.daysoftheyear.com)

Today is National Tax Day (in the USA)

April 15 of each year is National Tax Day. In the United States, Tax Day is a term for the day on which individual income tax returns are due to the federal government. Income tax was first collected in The Untied States in 1862 to fund the Civil War. It was deemed unconstitutional due to not being apportioned with conformity across the states. The United States once again enacted income tax with the 16th Amendment in 1913. At that time, the filing deadline was March 1. In 1918 the deadline was changed to March 15 and then in 1955 for the most recent change, the filing deadline was moved to April 15th. Source: nationaldaycalendar.com.

On this day in 1868, Peter Behrens was born in Hamburg, Germany. Noted for his influential role in the development of modern architecture, Behrens was also a pioneer in the field of industrial design. He is perhaps best known as a co-founder of the Deutsche Werkbund in 1907, an association of artists, architects, designers, and industrialists that furthered the development of modern architecture and industrial design and became influential in the later creation of the Bauhaus School of Design.

History: Victor Vasarely born in 1908
The Hungarian-French artist Victor Vasarely (born: Gyözö Vásárhelyi ) was born in Pecs, Hungary, in 1908, Vasarely began his artistic training in Budapest in the late 1920s. In 1928, he studied the concepts of the Bauhaus working under Sandor Bortnyk at the Mühely Art School. Vasarely moved to Paris in 1930 and became an independent graphic designer. His early work was characterized by strong black and white contrasts. In the late 1940s, Vasarely developed his own geometric abstract style exploiting the deception of the human eye using forms of geometry and color nuances to trigger striking spatial effects. This led to the formulation of the principles of the short-lived Op Art movement in the early 1950s for which Vasarely is probably best known. In 1970, Vasarely opened the first museum dedicated to his art in Gordes, France (it closed in 1996). In 1976, he founded the Fondation Vasarely in Aix-en-Provence (housed in a building designed by Vasarely). In 1976, the Vasarely Museum was established in the artist’s birth-town of Pécs. A second museum in Zichy Palace in Budapest followed in 1987. Victor Vasarely died in Paris on March 15, 1997.

Today in History: The first modern Olympics open in Athens in 1896

On this day in 1896, 241 athletes from 14 countries took part in the first modern Olympiad in Athens, Greece. The event took place over 1500 years after the last ancient Olympic Games, which originated in Olympia in south-western Greece.